100.8kg! My weight has reached its highest yet, despite trying to eat smaller portions and giving up biscuits and desserts. I don't know if there is a connection but my knees have started giving a sharp twinge when I try to get out of my chair.

I was grateful for my walking stick as I hauled myself out of the taxi to get to the doctors' surgery this morning. We were there to discuss the problems I have been experiencing in trying to give up the dexamethasone steroids. I have taken none for 4 days in a row now, and this is my third attempt.

The doctor explained - if I understood correctly - that steroids can mask symptoms of things that I have picked up due to the depressed state of my immune system caused by the chemotherapy. On stopping the steroids these other symptoms such as a couple of abscesses start coming to the fore.

A lot of my extra weight appears to be water retention. My feet and legs definitely look plumper, as does my stomach.

We came away with prescriptions for diuretics and also for the extra clomipramine mentioned by someone who commented to a post I made in the Macmillan support forum. I can now increase the dose of clomipramine to the 200mg daily now being advised by Prof. Pilkington.

Our GP is going to check my blood levels so I had to get four blood samples taken. It took two nurses and a doctor half an hour to get just about enough blood for the tests. Now I know what a pincushion feels like! It's always such a struggle getting any blood out of me that I'm thinking of changing my surname to Stone!
Posted on Friday, May 25, 2012 2 comments

I weighed myself on the bathroom scales this morning, as I do every morning, and the scales read 100.2kg. I have broken the 100kg barrier for the first time, though this was not a goal I was aiming at. Overall I am starting to feel better by very small increments. But I'm sure I'd feel even better if I could shed some of this excess weight. I'm down to a small fraction of a steroid tablet per day now and tomorrow we are going to try again to stop the steroids altogether.

Olga thinks a lot of the weight gain is water retention and I'm not going to disagree with her. My feet look bloated and my shoes feel unusually tight. We did try a course of diuretics prescribed by the GP, with no effect. Today we are going to try Spilanthes to see if that helps.
Posted on Sunday, May 20, 2012 1 comments 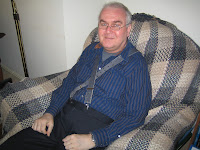 Another milestone in my life - my 59th birthday. Ten months ago in the hospital in Newcastle when I was told what I had I wondered whether I would see it. Well I'm still here, still beating the bugger and now have my sights set on reaching 60!

My main ambition now is to get back some fitness. If I can get rid of my problems with balance and the weakness in my legs then I will be half way to feeling normal. Though I can't entirely get out of my mind the knowledge of having a ticking time bomb in my head that could go off at any moment. I really wish I could have my head scanned more often than six-monthly.

But enough of that. For now I'll celebrate the fact that I've survived for 10 months and the tumour doesn't appear to be growing. (touch wood.) Life isn't bad, even with a brain tumour.
Posted on Monday, May 14, 2012 13 comments

Another appointment with the oncologist at Carlisle Infirmary to check on my progress and find out the results of my last MRI scan. The good news is that the tumour hasn't grown. The bad news is that it hasn't shrunk, either. The scan showed no change over the one made on 5 January. I had really been hoping for something a bit more positive to show for the weeks of tiredness caused by the chemotherapy, something extra to show some gain from our decision to take clomipramine in addition to the "standard" treatment. So to tell the truth I was a little disappointed. It seems the surgery and radiotherapy did most of the work in reducing the tumour from the size it was originally.

My next appointment with the consultant will be in three months' time but I won't have another MRI scan for six months unless I experience brain tumour symptoms in the meantime. We were a bit disappointed about that, too, as it smacks of a decision made on budgetary rather than clinical grounds. I've read quite a lot about these glioblastoma multiforme tumours. They can lie dormant for weeks, months or even years and then suddenly begin growing aggressively. I'd rather someone kept an eye on it a bit more frequently. I don't know if it is possible to find somewhere I could have an MRI scan privately. Olga finds our NHS rather "hands-off" compared to hospitals in the former Soviet Union.

The consultant, Olga and I discussed the issues I have had since the completion of treatment and I came away with some diuretic tablets to stop the water retention that may be accounting for a lot of my recent weight gain. Most people put on weight when they start taking the steroids; perversely I have really only started piling on the pounds after we began reducing the dosage.

We are also going to make another attempt to stop the steroids entirely: So far we have got down to 0.5mg or a quarter of a tablet which is about the size of a breadcrumb, but the last time we tried to stop completely I got a mild headache. Let's hope this time we are more successful.
Posted on Thursday, May 10, 2012 5 comments

100kg! Well, to be strictly accurate 99.9kg. That's what the bathroom scales told me my weight was today. I could hardly eat any less and maintain a healthy diet. I'm eating the same things as normal. But my weight seems to be increasing uncontrollably ever since we started reducing the dosage of dexamethasone.

It's rather worrying. I was about 87kg when I came out of hospital. Since then my weight has slowly increased, which everyone has put down to the steroids. I actually hoped that I could start to lose a little weight after reducing the dosage. I thought I would feel a bit more energetic if I didn't have to carry what amounts to a loaded rucksack around with me.

The weight gain is also rather inconvenient, as I can't get into any of my trousers! Before all this started I was a size 40 that could still get into my older size 38 trousers. But now my waistline is a size 46! Most of this increase has occurred over the last few weeks. What can we do to stop it? Our GP didn't have any useful suggestions.
Posted on Thursday, May 03, 2012 3 comments